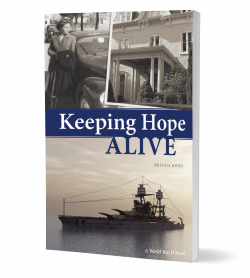 Maggie Amos faces challenges as she takes on a new identity caused by the stress of World War II. The old life which included her engagement to Ben Tarelli is shattered after he enlists in the Navy. Circumstances result in Maggie living a lie while her religious background creates deep feelings of guilt.
Ben is assigned to a destroyer that is part of a fleet assembling in the South Pacific. As he fights for his country and his survival, he dreams of life after the war with Maggie at his side. However, his dreams are jeopardized when he loses contact with her.
A new identity forces Maggie to adapt to an unfamiliar culture while managing a business as a single mother. The lies of her past become less vivid as her success and self-dependence increase.
Ben does not understand the uncertainty of life. Questions are all he has to occupy his time while at sea. Why hasn’t Maggie written? Will I ever have the opportunity to see her? Will I survive the next attack? Could I be taken prisoner? Where is God when I need Him? Does He even exist? Rest and sleep are difficult.
Will Maggie’s creative deception cost her the friends and support of an entire village? Is forgiveness possible?